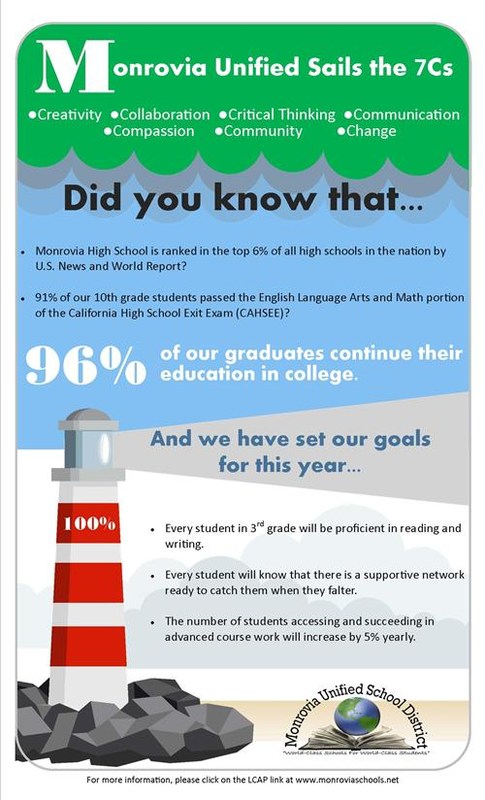 The Local Control Accountability (LCAP) plan has been developed with community input, based on student outcomes, and following guidelines regarding 8 priority areas outlined by the California Department of Education. Please click on the title to view the LCAP.

Monrovia Unified Confers Diplomas to More than 400 Grads at Commencements

Wearing American flag bandanas and tie-dye shirts decorated in red, white and blue, the Clifton Middle School robotics team known competitively as the Hippie Bots stunned an international field of high school and college students by winning the 2017 FIRST Tech Challenge (FTC) Dutch Open in Eindhoven, Netherlands on May 20 as the only competing American team.

Monrovia Unified to Celebrate Class of 2017 with Graduation Ceremonies

Monrovia residents were treated to a strange and lively sight on May 20 as Monrovia Unified students – dressed as Princess Leia, Batman and other well-known heroes – danced atop a star-spangled float while singing “Raise You Up” from the musical “Kinky Boots” as part of the Monrovia Days community festival parade.

Twisted metal, shards of broken glass and pools of fake blood littered West Colorado Boulevard on May 16 in front of Monrovia High School, where two colliding vehicles kicked off the school’s “Every 15 Minutes” program to demonstrate for juniors and seniors the very real perils of operating a car while under the influence of drugs or alcohol.